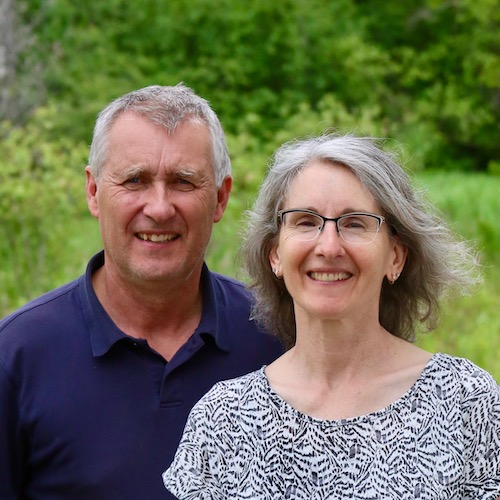 Michele has been married to Mike since 1985 (30 years and counting) and has come to WISDOM with an array of family life experiences given the children with which they have been blessed.

Their home schooling adventure began in 1994, having 'bumped' into some home schooling families both at church and in the community. An introductory meeting at a Homeschooling presentation ignited their openness to embarking on the adventure. Upon moving to Lamont, 40 minutes east of Edmonton, the Barters slipped quietly into town and began to homeschool their 4 children. Michele was thrilled (most of the time) to be able to have her children home with her.

Moving out to an acreage brought their family into a great appreciation of God's creation. Opportunities for responsibility, play, work, and pleasure abounded as they delved into the typical activities of country living: gardening, sheep, chickens, horses, septic maintenance….

As the years passed, 5 more children (and characters) were added to the ranks and flavoured the Barters' homeschool 'pot'.

Currently, Michele and Mike enjoy 7 grandchildren by their eldest who married a formerly home schooled fellow, and another 4 grandchildren from a free-spirited second daughter who also married a homeschooler. Their eldest son graduated with a B.of Psychology from King's University, and recently earned a Masters from St Paul's, Ottawa, and the fourth-born married and is enjoying work as journeyman Cabinet Maker. Their fifth is pursuing a painters apprenticeship, recently married and beginning their family. Of the remaining ones, two are currently in the labour force, one is finishing high school 2022, and the last one is in the homeschool trenches until 2024.

Michele and Mike appreciated WISDOM’s philosophy from the beginning. They too, believe in the importance of upholding parents as primary educators, giving the family a fighting chance to be the foundation of a decent society. Michele (and Mike - the driver) joined the facilitator team in the fall of 2000, and have worked as a husband and wife team to serve and encourage WISDOM families. Currently they are also retained as instructors for WISDOM Ballroom Dance camps and workshops. Their vision is the encouragement to take heart, presented in Matthew 6:33- "Seek first the kingdom of heaven and His righteousness, and all these things will be added to you." They regard home schooling as an opportunity for children's innocence to be protected, and for growth in character and godliness to be nurtured.