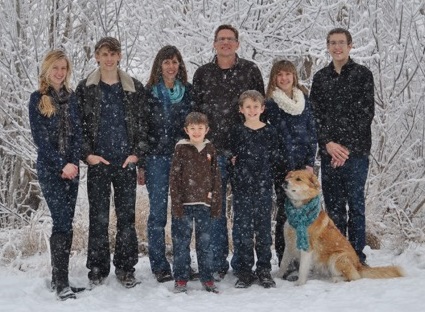 Dave and Suzanne Knoch have been married for 21 years.  Now, isn’t that testimony enough to the fruit of home schooling?  They are the thankful parents of Jeremiah, 19, Naomi, 17, Samuel, 15, Selah, 13, Joel, 10, and Isaiah, 7.  They have enjoyed the country life for the past ten years, including  the hard work.

They decided to home school before their children were born so their children have never seen the inside of a schoolroom, except on election days.  One of the biggest challenges they’ve faced over the years, especially in the beginning, has been unlearning what they grew up seeing modelled as learning. If they knew then what they know now, they know they would have enjoyed some of the early years a lot more.

They have lots of precious memories, but also lots of memories of feeling like ‘it was never enough’, Suzanne more so than Dave. This clearly quenched the joy of learning at times, but never their resolve to persevere.  Home schooling has never been an option.  There is nothing else they could do in faith. They appreciate what they continue to learn though and recognize how critical it is that they pass on what they have learned to their children, in order to equip them to train up the next generation.

One thing, amongst the million things, they’ve learned, is that there is no formula, that comparison is bad (and actually sinful), and what matters more than anything else is whether or not the parents are growing in their own personal relationship with Jesus Christ and each other.  It is so incredibly easy to fall into the trap of responding to the urgent, over the important. When the foundations are in place, parents are going to be more attuned to how to equip their children.  The choices they make over how to steward their time and resources will likely bear more fruit, even when the going gets tough, which it always does when you make good choices.

All this happens on an acreage south of Lethbridge, towards the town of Raymond, where they share living space with two cows, 150 chickens, 8 sheep, assorted cats, some rabbits and a dog named Ginger.

Dave and Suzanne are very thankful to be able to work with their children both at home and in their family business  (drywall contracting) in varying capacities, where life is exchanged and character is chiseled and refined in life’s intimate crucible.